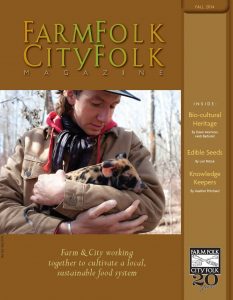 A great deal of attention has been paid to the recent heavy-handed repossession of the Arbutus right-of-way in Vancouver by Canadian Pacific Railway (CPR) and the resulting displacement of the award winning Cypress Community Garden. As one of the large number of community gardens that have popped up within the rapidly expanding urban agriculture movement, it was an important space for conserving the culture and heritage that lies within the small scale farming communities. The garden provided much needed green space in the neighbourhood and was home for diverse species, including the important native pollinator the Mason Bee. However, the story of how the land on which the garden was situated was appropriated by the Canadian government and given to the CPR, without consent of the original Coast Salish inhabitants is a much less celebrated part of Canadian heritage.

Read more in this edition of FarmFolk CityFolk Magazine.