Tantalus Vineyards is located in Kelowna and is known to be one of the oldest continuously producing vineyards in BC, with the first vine on the property planted in 1927. Over the years, they have implemented projects on the farm that reflect best management and climate-friendly practices on the now fifty acres of farmland. At Tantalus, they choose not to use herbicides and insecticides and strive to use only organic approved sprays, amendments, and best interventions possible when needed. The expectation of being climate-friendly can’t undermine the ability of a farmer to make a living wage.

Climate-friendly practices in effect at Tantalus include an on-farm composting program, no-till, year-round cover crop program, compost teas and microbial sprays, and a collaboration with a local honey farm that hosts hives at the winery. Felix Egerer, the lead farmer at Tantalus, has been following regenerative farming practices for several years and continues to look for innovative ways he can put this into practice on the vineyard. Several environmentally friendly and energy-efficient initiatives led Tantalus to be BC’s first Leadership in Environmental and Energy Design Certified Winery. A founding member of Sustainable Winegrowing BC, the vineyard is now fully certified under a comprehensive set of high standards for water conservation, ecological diversity, soil health, worker safety, social benefit, and more. As well as being Salmon-Safe Certified by the Fraser Basin Council, Tantalus Vineyards works with Okanagan Similkameen Wildlife Habitat Stewardship to preserve the 10-acres of natural, dryland forest in the center of the vineyard. Egerer says,

It started with changing the mindset of everyone on the farm. We are fortunate that, as a company, we try to push sustainability and better farming for a long time.

Tantalus also adopts several climate-friendly farming practices that reduce their emissions and benefit their crops. Egerer says, “The first big thing is mindset, so really trying to bring everyone into the conversation. Full-time staff, the owner, temporary staff, and seasonal staff all talk about our goals to reduce our impact. If you don’t believe in why we need to change our practices, you’re not going to make it happen. And the more people you get behind it, the easier it gets because it’s not easy, farming is hard; yesterday we registered 45 degrees.” Egerer recalls the first thing they did when he came on board was drop synthetic fertilizers. He says, “While we are not certified organic, I do try to and have succeeded in only using [organic] sprays, so it’s mainly sulphur and some oils and bacterial sprays, which is something that’s kind of new and interesting – using bacteria to colonize the leaf and fruit so that it doesn’t leave any room for anything else.”

Cover cropping in between rows helps build soil health around the vines, provides habitat and forage for pollinators, and retains water. Click To Tweet

Tantalus has started seeding cover crops and is experimenting with them each year. Cover cropping in between rows helps build soil health around the vines, provides habitat and forage for pollinators, and retains water. Egerer makes his blends following a rotation for planting. He explains, “We are already farming a monocrop of grapes so trying to break it up with as much diversity as possible is the goal. In winter we seed grain, and vetch and winter peas because it gets so cold here we only have some species that survive. And then in summer, for example, we seeded 12-13 different varieties with worm castings mixed in and some inoculant.”

With such a dry summer this year, the warm season varieties struggle more. Any growth in a cover crop is a success for Egerer. He says, “Sometimes you rip out a plant that’s only a couple of inches long and the root system is 4-5 inches deep. That’s really what counts; the roots that leech carbon, pull it into the roots, and feed the microbes.” Most of their rows have about 75% green ground cover. The team does not mow much in an attempt to keep as much growth as possible. This pays off in bouts of extreme heat because the ground is kept cooler and moisture is preserved. Egerer says, “Anything that is green captures carbon, puts it in the ground and leeches it through the roots. It adds to the organic matter of the soil.” When both their winter and summer cover crops reach maturity, they mow them with a flail mower and leave the residue as mulch. Egerer says, “Everything that is dead and on the ground, also protects the soil, but then once it does start raining again hopefully, it’ll all start slowly breaking down and feeding the soil microbiome. And then those can feed the vines.” 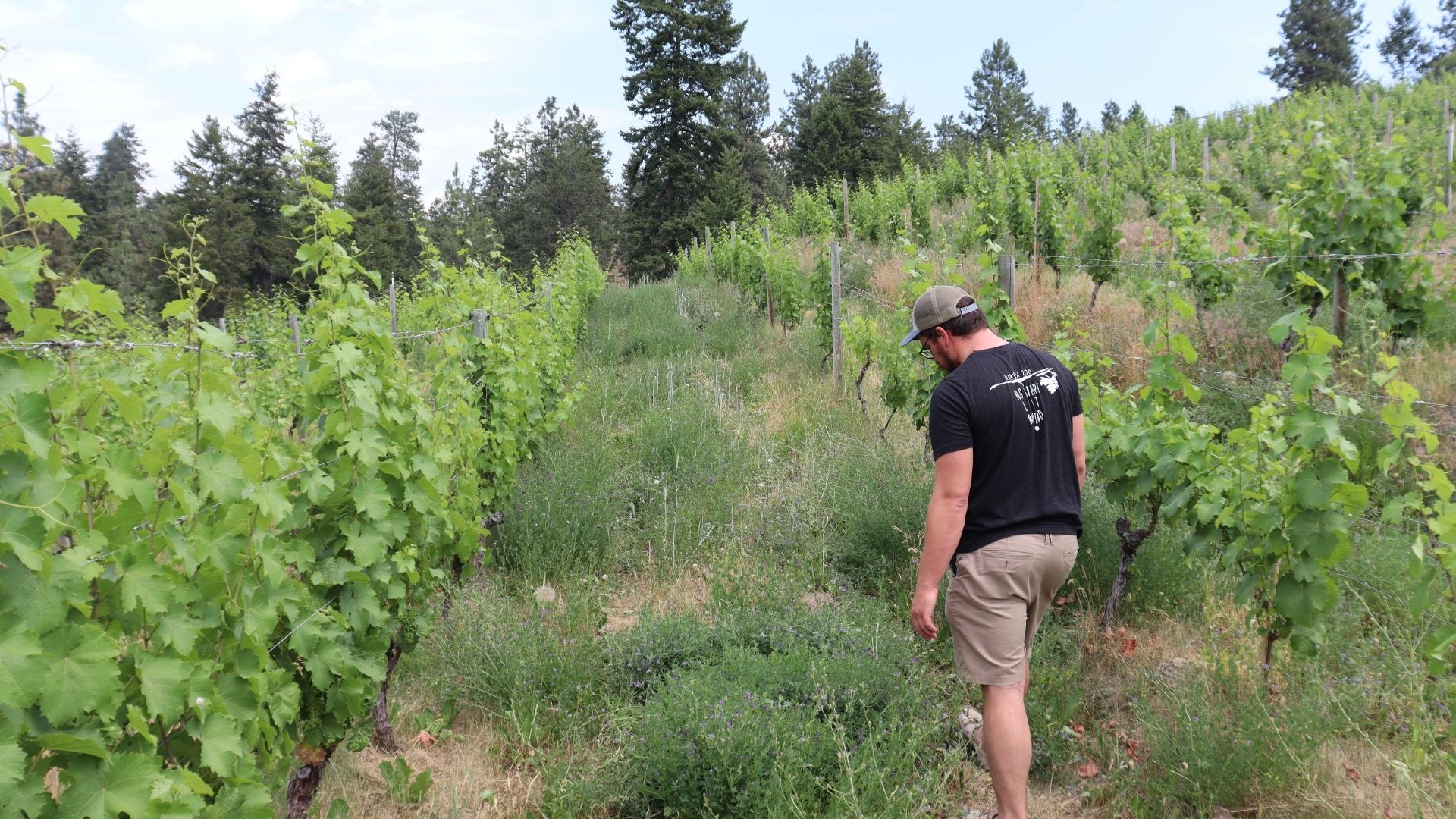 After a very significant rain event several years ago and a section of the vineyard losing a foot of topsoil to the gully, Tantalus decided to stop tilling. With the implementation of no-till cover crops, they have started to see an improvement in areas through soil samples. Egerer notes,

Organic matter is increasing very slowly, vine performance is better, and there is diversity in species. Flowers are popping up now that I haven’t seen before. The species that I have seen aren’t just localized anymore, they’re spreading – so that’s encouraging.

Tantalus does their own composting on-site to reduce their waste from both the vineyard and the winery. This compost is then spread back onto the ground under their vines to help inoculate the soil with beneficial insects and microbes. To enhance biodiversity around the farm, they work with local beekeepers at Arlo’s Honey Farm to host beehives, avoid having fencing around the property, and install bird boxes around the vineyard. Critters naturally roam between properties and birds nest in nearby trees.

At Tantalus Vineyards they continue to consider ways they can reduce their impact. These practices help Egerer be efficient in his farming practice while also helping our climate. For example, Egerer says, “To me, it’s a no brainer – if I don’t mow six times a year, I save myself labour, machine breakdown, diesel, and I don’t compact my soil as much. And sure, it looks a little messier but I think it looks much more beautiful than something that’s completely manicured and dead.” The strategies they adopt are incredibly beneficial to the farm, which is why they start with the soil. Egerer says, “I look at it as: I’m farming the soil and trying to preserve and regenerate it. There just happens to be vines on it. Everything we do is for the soil so we try to keep it covered as much as possible with dead and living plant material.”