Posted on Monday, 1 February 2021 under Stories 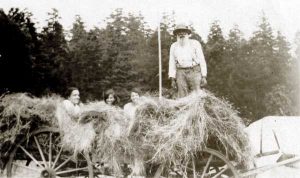 Born into slavery and freed by her father – an expert cattleman and farmer -, Silvia Stark became one of the founding members of Salt Spring Island’s farming community. Her tremendous journey from California to the Colony of Vancouver’s Island in the 1860s is one of many who settled the area. Sylvia and most of her family braved the rough coastal Pacific waters on board the “Brother Jonathan,” while her husband Louis and brother Jackson drove cattle and horses north by land. The Stark’s soon established a farm in the Broadwell area of northwest Salt Spring Island.

“A herd of 14 dairy cattle and chickens also came with them. … When Reverend Robson visited the Stark’s about 18 months after their arrival he found that their dairy herd had doubled in number and that they were growing wheat and vegetables. “[Sylvia] filled my sacks with good things,” Robson wrote in his diary, “4 lbs fine fresh butter, 2 qt. bottles new milk.”” – Stratton – Farm Farmers Farming 1859-1939

Despite violent and racist encounters, the family continued to grow vegetables and raise chickens over decades on the Island. Their farming contributions include introducing oxen and planting many of the Island’s fruit trees. 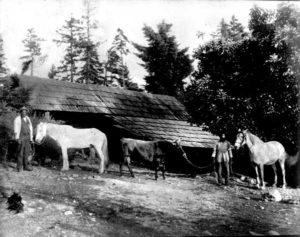 “Stark [Louis] was reared on a fruit farm in Kentucky. He grafted and planted fruit trees among the stumps. His plan was to have the fruit trees coming on while the stumps decayed. In time they would be easy to dig out. They soon had enough cleared land to raise grain for their own use. They kept chickens, turkeys, and pigs. The bears caught some of their pigs, the young ones, and the turkeys ran wild. When they wanted turkey, they had to shoot them from the trees.”  – Stratton – Farm Farmers Farming 1859-1939

Apart from a brief period in Nanaimo, Sylvia remained in Salt Spring for the rest of her life living with her eldest son Willis and earlier, her then widowed father Howard. She passed away in 1944 at the age of 104. Sylvia’s descendants have remained on Salt Spring Island into the 21st Century, some of which still own her most recent property along a street aptly named Stark Road.

On April 25th, 1858 the first group of Black settlers arrived on the Colony of Vancouver’s Island in response to an invitation from Governor, Sir James Douglas. Known as the “Pioneer Committee,” this initial group of Black settlers from San Francisco gained the right to own land, among other protections, as settlers and later British subjects of the Colony. This migration of Black families is now recognized by the Federal government as an ‘Event of National Historic Significance.’

With files from the Salt Spring Island Archives and BC Black History Awareness Society.