Posted on Monday, 25 May 2020 under Citizen Seed Trial

Mel and I caught up on a recent sunny afternoon over some cold lemonades on the sprawling UBC Farm… just kidding, this interview happened over Zoom like everything else during these crazy times. Nevertheless, Mel’s passion for the project and sense of humour came through clearly. Mel is the Field Coordinator at the UBC Farm and works with the BC Eco Seed Co-op representing the farm. Mel provided FarmFolk CityFolk with the Winter Rainbow kale seed being trialed in the 2020 Citizen Seed Trial. In this interview she tells us a bit about how the variety came to be, her hopes for it, and the importance of engaging gardeners in seed breeding. 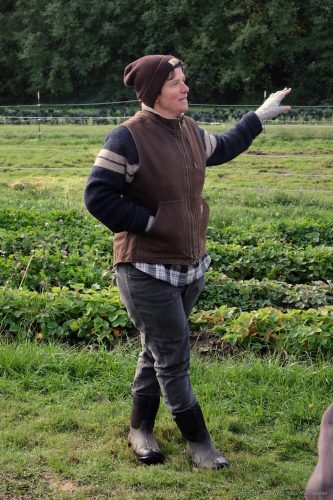 Mel leading a group during the 2017 BC Seed Gathering

Steph Benoit: Hey Mel! Thanks for joining us today. How are you?

SB: I’m doing well! So to begin with, Mel, could you tell us a bit about the history of the variety of kale that you are breeding?

MS: The variety originally came from Frank Morton. He’s a farmer/breeder down in Oregon. The original variety is called Rainbow Lacinato. So, that was the variety that we ended up growing as part of a variety trial with what used to be called the BC Seed Trials here at UBC Farm as part of our research. Part of that research was to overwinter the plants and then just see how things did. I can’t remember exactly, but we must have had at least a dozen varieties of different kales that we’d grow out and measure different yields and various growing patterns. We got in a way “gifted” with a really harsh winter, which in terms of farming was not that great because we lost a lot of our kale that winter and I think most people did actually. I think it must have been like… 4 years ago I’d say? I’d have to go back to see exactly the year that was grown out.

Maybe backtracking a bit, the Rainbow Lacinato from Frank was a variety he actually crossed himself. It was a Redbor and a Lacinato that ended up crossing, so already that variety had a lot of variation within it. Each plant within a seed packet would look not drastically different, but would have a significant difference compared to the Lacinato or a Redbor. So within the population what I noticed was that about 20-25% of the plants survived, and all the rest were dead. I said we got gifted a hard winter– for someone that likes to play with breeding and things like that, those are the kind of pressures where you’re like, “Score! My selection was just done for me” (laughing). So we knew that those plants that survived were then by default more winter resistant, so we saved them, grew them out, grew them to seed, and then I started growing it out after that. So it’s been through, I think, two generations with me now.

SB: Why did you take on this breeding project?

MS: For the same reason I decided to farm (laughing)…not logic. No, I would say I’m more of a breeder by convenience. Oftentimes in the breeding projects I end up taking on, nature did most of the work and I’m like, “Ooo, that’s there, why not keep going?” It’s interesting in a way because I think in our region, more and more people, a lot of mixed vegetable farmers, started relying heavily on brassica crop overwintering to get what we call the rapini, in the spring, those sprouting and flowering plants, and I’ve seen over the 15 years I’ve been farming people growing more and more and more of that crop because it’s such a great crop to have. We’re at the end of it right now, but it covers from March to almost May and you have this amazing crop of kale come in from having overwintered. We’ve pulled out hundreds of pounds this year, just here, just in greens in the spring, which is amazing to have. So basically when this whole harsh winter happened, it really hit some farmers really hard who were waiting on thousands of dollars of revenue that just disappeared. So it was convenient that the plants survived and I could save the seeds from it and all that, but I saw that if we were always saving plants with that in mind we would have way too many projects; in that case, what I saw was an opportunity for people in our region. If you were to grow that kale, you’re a little bit more sure that you won’t get that harsh reality of losing your whole crop. It gives you an opportunity to have a hardier crop. Also, we’re in the lower mainland, so I can say that it’s winter hardy here, but I can’t speak for anybody up north– but I think that this would be a variety that would be interesting for people up North to grow out and test where that limit is of where it can overwinter. 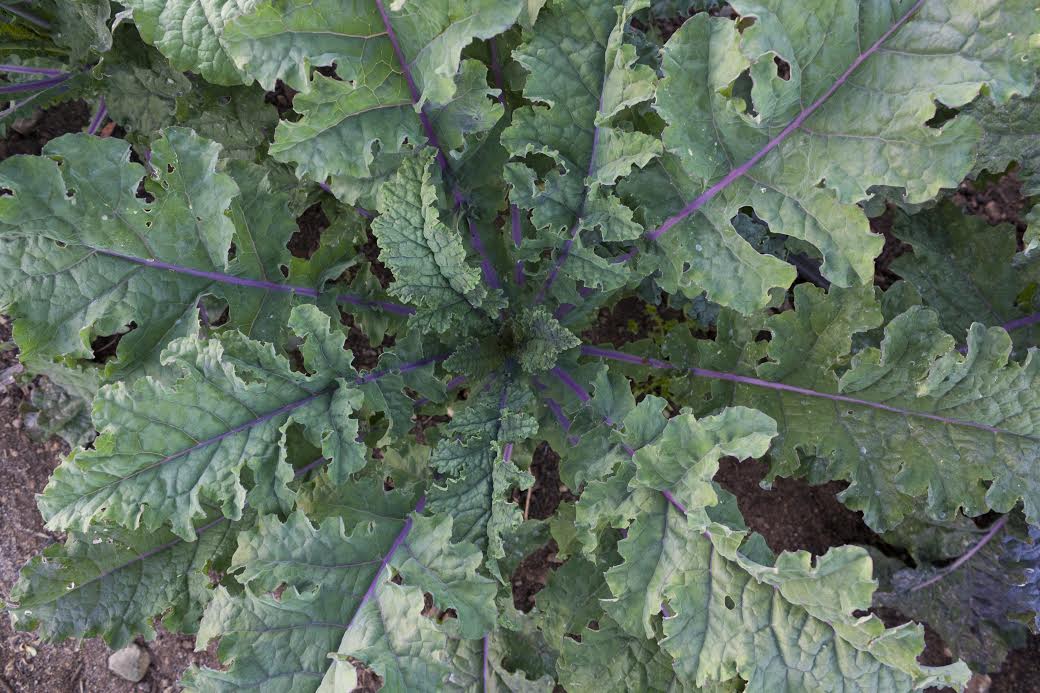 SB: What are your selection goals for this crop?

MS: Obviously the winter hardiness needs to remain, though because it was already selected pretty hard for that, I’m having a hard time continuing to select for that here, because they will all survive now. We would have to get a harsher winter than the one we had 4 years ago to really test for that now. It would be interesting, actually, to send that seed to folks up north and ask them to keep selecting for it. So I think that will always be one of the traits that needs to remain with the plant, but as of right now, because it was a highly variable crop, it still shows a lot of variability, so as it is right now it’s more of an aesthetic [selection]. Every year it’s been grown (so far it’s only been one more population that I got to play with) I went through the crop and aesthetically there are just things that I like to see in kale and things that I don’t like to see in kale… sometimes it’s a colouration, a shape of leaf, size of plant, height of plant. I’m trying not necessarily to make a homogenous population, because there’s no benefit to that, but I have preferences, so it’s mostly just based on my preferences. I’ve mainly been selecting out things rather than trying to keep things in. I’m removing what I don’t like rather than keeping what I do like so that way I can keep my population as broad as possible.

SB: How does your selection differ from the original variety that you started with?

MS: That’s a good question, actually, I’ve been curious to see if I were to grow out the original, or the population Frank Morton still sells, the Rainbow Lacinato. I haven’t done the comparison backwards. I’ve kind of made an assumption that my planting is different enough to give it another name but that’s something I should actually be careful about and I’m aware of… we don’t just save a crop and give it a different name suddenly. But I felt that the fact that 75% of the original planting died (and that what was remaining was more homogenous than what we started with) means that I can assume that we eliminated a lot of the gene pool of that planting. From what I can remember of Rainbow Lacinato from having grown it is that I think our crop tends to have darker leaves and less variation, I would say. It’s a little bit narrower in the population diversity. But to really be able to state the difference exactly, I would need to grow out Rainbow Lacinato side by side and just observe the differences. 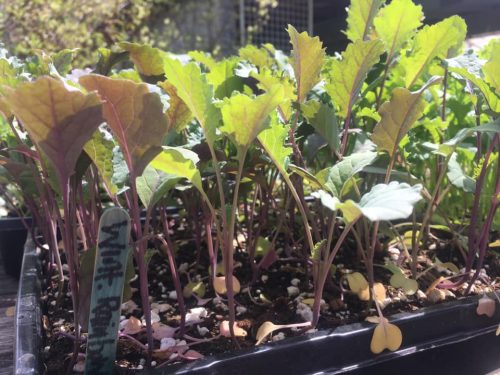 SB: So what can people expect from growing out the seed you provided for the 2020 Citizen Seed Trial?

MS: …Kale? (laughing). A kale that will like 99% sure overwinter, except if we have like an apocalypse winter, which along with the pandemic would be a little mean. It’s actually a really sweet kale in the spring. It falls in that category where it doesn’t get bitter as fast as some others, I’ve found. It’s beautiful. I mean the colouring of it compared to boring green kale, I find it quite stunning. It’s a little bit tougher than some other kale on the market, a little bit tougher compared to some other green kale, so probably a little bit more towards the Lacinato kale, but really a midway between the two, which makes sense, because it’s been freshly crossed. And the plants are pretty vigorous, which is kind of the benefit of having high diversity within the crop. The genetic pool is still pretty strong, so I feel like the plants are quite tall and vigorous.

SB: Lastly, why do you think projects like the Citizen Seed Trial are important to the culture of seed saving in BC?

I think it’s the next step forward from the realizing importance of gardening for food security. The best comparison I can make is that growing a crop for seed makes you realize the importance of seed in the same way that gardening makes you realize the importance of food and the hard work that goes into it and gives you respect for the people who are doing the work. And it’s great to have people exploring different aspects, and not just sticking to their grocery store-style vegetables. It can inspire people into eating even better and fresher… I think these are all good things that can happen with these types of projects

This transcript has been lightly edited for length and clarity.