Posted on Thursday, 21 May 2020 under Citizen Seed Trial

Our first Citizen Seed Trial farmer interview comes to us from Hank Keogh of Avoca Seed in Oregon’s Willamette Valley. Hank bred the Dazzling Blue kale variety being used as the control variety in the 2020 Citizen Seed Trial. It was also featured in the 2016 BC Seed Trials and was a crowd favourite! In this interview he takes us through his experience breeding the variety, explains the love story and musical inspiration behind its name, and offers some advice to aspiring plant breeders. 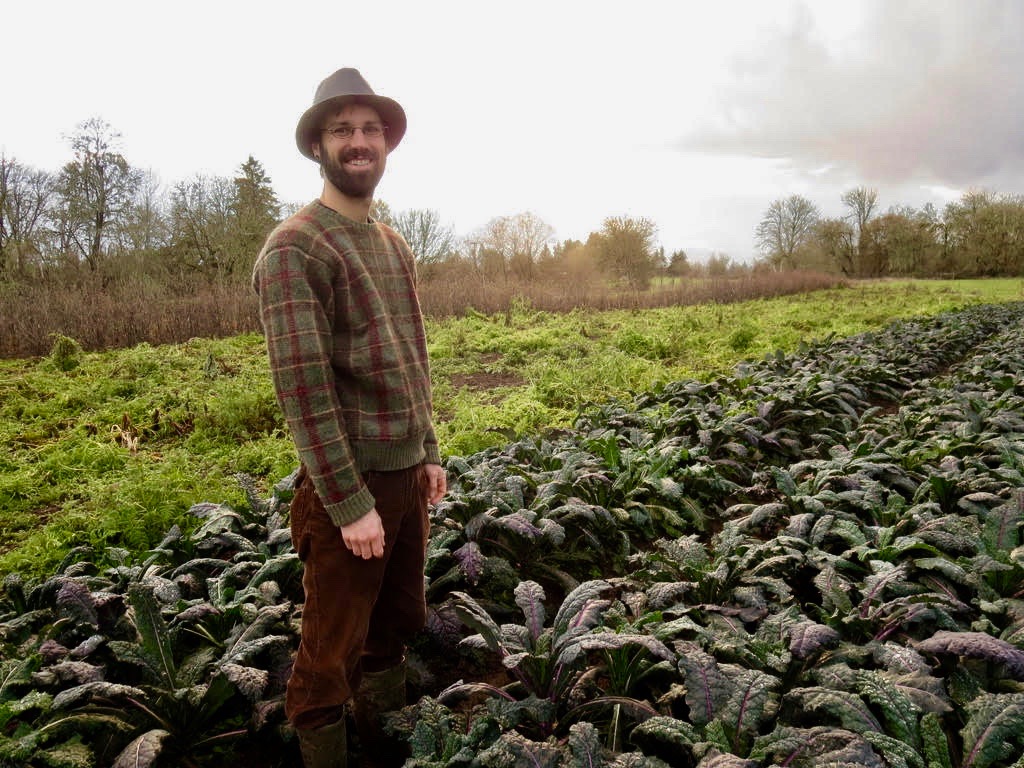 Hank Keogh in a field of Dazzling Blue. Photo courtesy of Hank Keogh.

Steph Benoit: Can you tell us a bit of the backstory of the variety that you’ve been breeding?

Hank Keogh: I started working on it around 2010 when I was working at Wild Garden Seeds. I’d been working there a couple years. A lot of new varieties had been bred by Frank Morton there, who is kind of my mentor, so plant breeding was encouraged, and we were encouraged to see the details of plants. One of the crops that we grew there was Lacinato Rainbow, which was a Lacinato kale type, but it had a lot more red colours in it, a lot of diversity of leaf shapes, things like that. So we were going through it, roguing it, harvesting seed, and just dealing with it, and it was a really pretty kale. Then, in the same day, we went over to the Lacinato patch, just the regular Lacinato that we were growing, and there were these plants that had just a little hint of this pink midrib in the regular Lacinato patch. I started thinking of a couple off-types we had seen in the Lacinato Rainbow patch that were more smooth-leaf, and I just got the idea in the field and then dug them up. I brought them to my farm, planted them in a little spot together, dug up 5 plants and put them together and they all made seed, and then this little breeding project began. And a few years later I increased those, grew them out, and got to the F3 generation, which is when you really see the diversity of what you have kind of show up. That year we had a really deep freeze and I had planted the first big patch of these kales that I had been selecting for for a couple of years. We had that deep freeze and like 90% of the patch died. For seed saving, it’s terrible, because 90% of your crop died. For plant breeding, it’s terrific, because 10% survived, and those 10% are the more hardy, freeze resistant genetics that you’d want to have more of in your crop. Plant breeders call it a silver lining, a selection event. 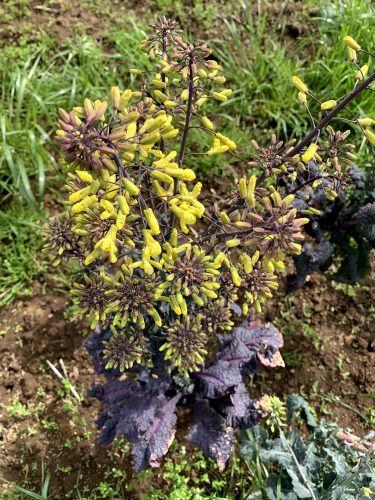 That spring, I was going through all these dead kales and picking out my favourite ones, these beautiful survivors, and digging them up and moving them around and kind of consolidating this patch, because it was kind of a big patch and 90% of them had died, so I was moving them into one smaller space so they could all cross pollinate together. At the same time, in the early spring of 2012 I had just met my future wife at an Organic Seed Alliance conference in Port Townsend, Washington and Paul Simon, who is one of my favourite artists, had just come out with a new album. I was listening to the album and moving around this kale patch and selecting my plants around the time I was meeting and falling in love with my wife. One of the tracks on that album, So Beautiful Or So What, is called “Dazzling Blue,” and has the line, “maybe love’s an accident, or destiny is true / but you and I were born beneath a star of dazzling blue.” And that’s the story.

SB: Oh my gosh! In the seed world that is like the ultimate love story…meeting at an OSA conference and then being inspired to name a variety of kale with them in mind.

So then how did you originally learn about plant breeding and become interested and passionate about it?

HK: I studied horticulture at Oregon State University, so that was kind of the basic biology of plants, and then really just learning from Frank Morton. He was a really great mentor to me and really taught me to notice how to select plants. For example, we grew a lot of lettuce, and he taught me that when the seed starts to germinate, they have that cotyledon and if they have any colour, there’s a bit of colour right on that cotyledon. If you’re growing a green lettuce, you can see really quickly, okay all of these cotyledons are supposed to be green, and if you see any red ones as you’re thinning your flat, you can just pull out the red ones. He taught me things to notice that are related, later, to how to breed for things. That’s true, too, of this Dazzling Blue kale. It has a pink midrib so when I grow it, I kind of oversow, I sow 3-4 seeds in a cell and plan to to thin them down to one and I look at the stems, when they’ve got this little cotyledon, and I select right there for the pinkest stem. That’s just an example, but I learned all those types of things, which is plant breeding, right there, from Frank. On-job learning. It was really fun. 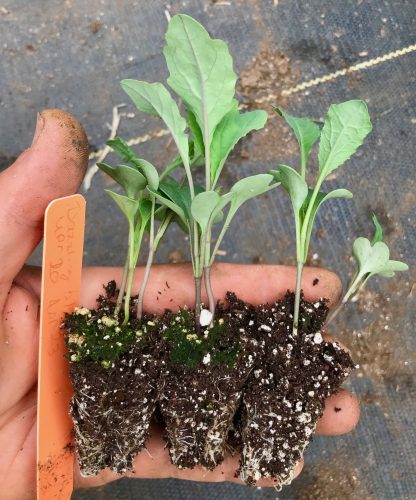 Dazzling Blue kale seedlings being grown out in the 2020 CST

SB: What made you want to maintain the Dazzling Blue variety and keep going with it?

HK: Well, I really like the variety and I was getting a lot of great feedback from basically everyone who tried it. There’s a hashtag on Instagram #dazzlingblue and when you look it up there’s all these people saying, “This is the best kale ever! It’s perfect!” And it really is. There are some things about it that I didn’t really intend. For example, one of the things I selected for was this really blue colour to the leaf; the dazzling part is the pink midrib and the blue part is the leaf. It turns out the blue is related to a waxiness in the leaf, a waxy covering, and I didn’t know at the time, but it turns out that that waxiness confers a lot of pest resistance to the crop. I heard of people growing it in California in the summer with a bunch of other kales and all the rest of them are succumbing to flea beetle and the Dazzling Blue is standing there big and strong with no flea beetle because it’s got this wax to it. It’s really interesting. I picked some out of my garden the other day and the water just beads up on it, on the leaf, and just flows off. It’s actually a bit difficult to wash, like that, because it’s so waxy.

SB: Wow, very cool. So what are some of your selection priorities for this variety going forward, then?

HK: Well it’s still a bit of a diverse population so I’m going for a bit more uniformity and still keeping the blue and the pink mid rib, but focusing in on a type, with a wide, smooth leaf, an upright, vigorous habit, cold tolerance. Cold tolerance is tricky because you have to have a selection event, right? And then there are some other things– in the last round I made some different, other selections for longer leaves. To make a really good bunch you need those long leaves. That’s easy in the fall, but I’ve noticed in the spring, as the months progress, the local kale leaves get shorter and shorter and look more like the Lacinato leaf. They start to look like these sad little kale bunches. So the last round of selection I made some selection for long spring leaves that you could get a good bunch out of in March. Wouldn’t that be great? That’s the hunger gap time. If you could get local kale in March? That would be amazing.

SB: Absolutely! So what can people expect growing out of the seed you provided for the Citizen Seed Trial?

HK: This is a relatively stable line, but it is still an open pollinated population. I continue to make selections and improve it with each growout. People should expect a small range of diversity around a central theme.

SB: Lastly, do you have any words of wisdom or advice for people who are just getting into plant breeding?

HK: Do something you’re excited about. Pick a crop you’re excited about because plant breeding takes a long time. It takes years… five, seven, eight years to get to a variety that is stable, really. So pick something that you like, that you can still care about seven years from now. I think that’s the most important thing- pick something you care about. I also like growing seed crops that I can eat, like peppers, kale, squash, as opposed to something like lettuce, where there is a much narrower window of time that you can eat some of the lettuce you’re growing for seed. I can eat this kale all winter long, and it’s terrific! But lettuce breeding is important, too. Also, maybe start with something easy, or at least easy to see. And my last piece of advice is that John Navazio always talks about juggling traits, that each trait is like a ball that you have in the air. One ball is the pink midrib, one ball is the blue leaf, and the other ball is cold resistance. How many of those balls can you juggle at the same time? How many can you keep track of in your head when you’re walking around the field of whatever crop you’re working with? How many traits can you hold in your head and evaluate? Not all of your plants are going to have all of the traits that you want, especially at first. In the early days of selection [for Dazzling Blue] I did a lot of weighing “well, this one has a good pink midrib but it doesn’t have the right ‘V’ shape, so I’ll plant it next to this other one that has a great ‘V’ shape, but not as big of a pink midrib, and maybe when they cross, they’ll blend a little bit.” That type of thing.

SB: I think that’s great advice. Thank you so much for making the time to talk about this, Hank. Hopefully there will be some interesting results from seeing all these people from across BC grow it out this year!

HK: Yeah, I’m excited. Also, I should mention that I’m growing out a lot of it for seed in 2021 so next year there will actually be an upgrade of the seed lot in circulation

SB: Awesome, well if people get excited about this variety we’ll send them your way next year!

This interview has been lightly edited for length and clarity.