Posted on Tuesday, 3 March 2020 under Stories 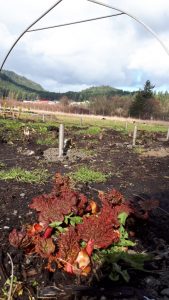 While winter has not yet fully released its grip, it does feel like spring is in the air, and the farmers at Lohbrunner Community Farm are feeling excited. Because of the wet (but fertile) flood plain soils, they aren’t as early as many farms on Vancouver Island to seed crops and get things in the ground, but those days are just around the corner.

Seeding of the first crops begins in the greenhouses in early March, and really ramps up in April. A few short weeks after seeding the first of those crops will be going in the ground. Rhubarb is already popping its head above ground, and a new greenhouse is going up for more hot crops for the 2020 season. The farmers are aching to get started after having been cooped up inside and on computers for the winter!

Other than the regular spring time happenings, Lohbrunner is excited by one big farm improvement that is in the works for this year – through a generous grant from the Victoria Foundation, they are finally able to get started on upgrading the watering system. Currently, the whole farm is serviced by a municipal water pipe far too small for its needs. The upgrade will mean an increased capacity for irrigating during those warm, dry summer months – meaning more land can be brought into production and more food is grown for our community in future years. And while this will take a lot of hard work and sweat to make this happen, hard work is something the Lohbrunner Community Farm Co-op has never shied away from.