Home Stories Preparing the Carrot Tent for the 2018 Crop

Preparing the Carrot Tent for the 2018 Crop

This year we have taken a bit of a different approach with setting up the isolation tent for the Carrot Seed Project by erecting the tent as late as possible before flowering. This is done in the hope that the carrot stalks will be strengthened by having more wind exposure and there will be more insect diversity once the tent is put up.

We set things up in two stages. Several weeks ago we erected the frame. As we had more available time this allowed us to get a bit of a head start on the tent set up. Also, with the frame ready to go, we can get the tent put up quickly when it needs to go up. Here is a time lapse of setting up the frame:

With the frame up we had several weeks of just keeping an eye on the weeds and other crop issues that may arise. I also had chance to put in some posts that will be used to string up the plants as they get more top heavy with flowering and seed set. 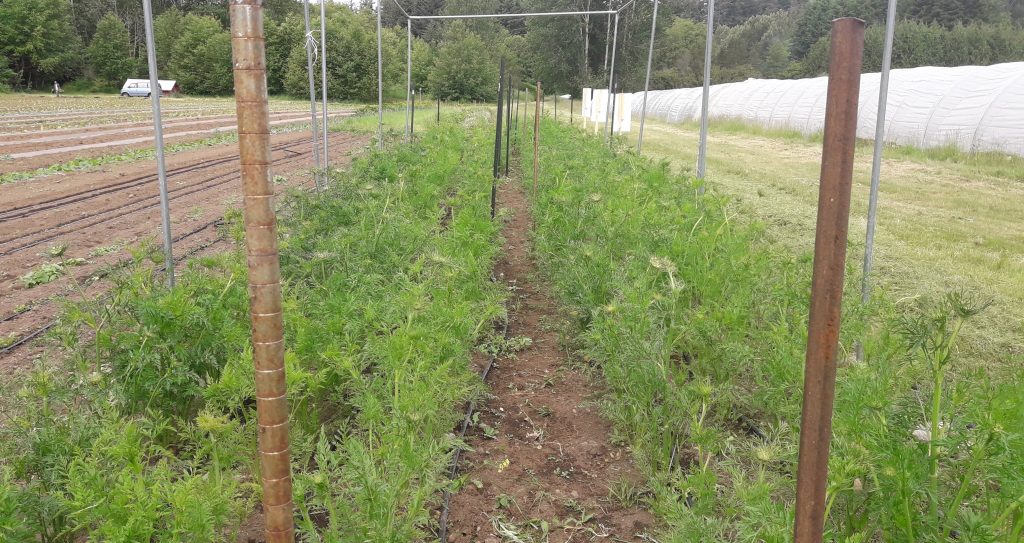 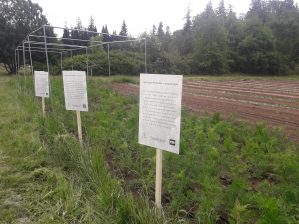 Another recent addition to the project was our interpretive signage. I tend to get a lot of questions when I am in the field working on the carrots so this gives folks a chance to better understand the project on their own! The signs talk about BC’s ideal climate for carrot seed production, the purpose behind the tents, and the breeding of flies as pollinators. As the flies start to fill the tent people start to get much more curious!

We can also use these signs at other events to talk about this project. In fact, the signs and one of the enclosures will end up at the PNE in August at their Agriculture in the City display.

With the frame ready to go we had an easy time putting up the mesh tents this week. Though I would have liked to leave them off a little bit longer, we are starting to see some flowers open up on the carrots that will be enclosure so the tent needed to go up. I actually could have left the tents off a little bit longer, but I have some travel coming up and wanted to make sure the tents were ready go before I left.

With the frames already up, three of us we were able to get the mesh up in less than an hour. It was a little tricky as we have two tents right beside each other and we had to maneuver a bit around the plants. But this does bring me to tips # 2 and #3: Bring some tall friends and bring a step stool! Also – be careful not to trample the plants as you are maneuvering around them. But overall the set up was quite smooth:

The next step in the process is the fly breeding! This relatively simple process involves drawing flies with raw meat onto which they lay their eggs. This often achieved more quickly by placing a collection bin in an area where flies frequent such as around standing water or a compost pile. Oh, and really stinky fish or roadkill helps.

Once the bait has been left out for a few hours it can simply be buried in the mesh enclosure where they will hatch, feed, pupate, then emerge as flies. We will do 2-3 cycles of this to ensure a stable population of pollinators throughout the flowering cycle.

Here are a few videos on the fly breeding process from 2017:

And if you have the patience – here I am building the bins and explaining the whole process in more detail.