Posted on Tuesday, 22 May 2018 under Canadian Organic Vegetable Improvement

For the 2017 carrot research project we planted two crops at UBC Farm – one plot inside the mesh enclosure and a “control” plot on the outside of the enclosure. There is not much of a presence of Queen Anne’s lace at UBC Farm and during the time of carrot flowering I did walk around the farm looking for its presence. Late in the season, after the carrot flowering period I did see s mall patch, but its proximity to the carrot seed crop and the numerous physical barriers in between make it unlikely there was any cross pollination.

Interestingly I was not sure what I would be looking for at such a young stage as carrot roots take time to develop and it would be hard to differentiate the immature roots of carrots and QAL. So the strategy I took was that of difference: are there any young carrot plants that look noticeably different and may indicate the presence of QAL. I knew even if there was some crossing it would only represent a small portion of the plants

A few things I looked for:

To assess the carrot seedlings I pulled them from the flats and laid them out on a table to get a look at them altogether. I separated out anything that looked noticeably different during this process. I didn’t do any counts or any close inspections with a magnifier or dissecting scope but I did take a lot of pictures that I could review. Here is short time lapse of the carrot separation process:

During this process I did separate about 8 plants from the first flat and just a few from the second flat. The ones I separated out seemed to have very poorer root development so these were my first suspects. However, when assessing the second flat I noticed the few of these I found were from the edges of the flat where there had been many dry cells and root development could easily have been affected. I thus attributed this characteristic to growing conditions as opposed to genetics.

So from this process I cannot guarantee the purity of this seed, but I do feel more confident that is has not crossed with QAL. Here are what the seedlings generally looked like: with the “deformed” ones on the right

Here they are up closer. The three on the left have well formed roots (dark purple) while the two on the right are lacking the same root 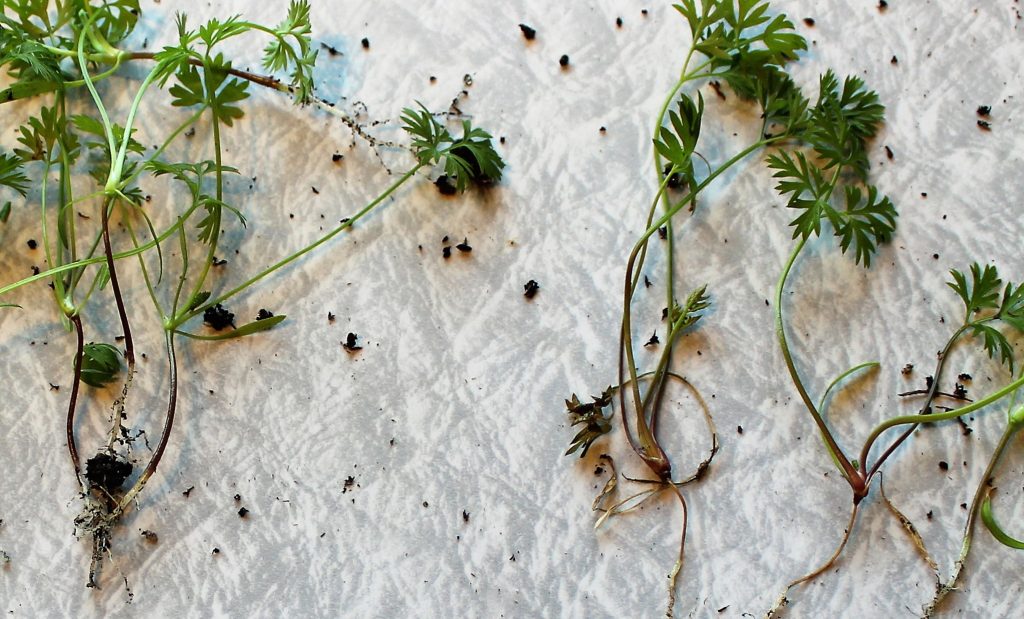 So now I will wait to hear back from the farmer who is growing these out in a trial to get the final word. If they do come true then they will be good to sell next year…