Gleaning from the Variety Showcase 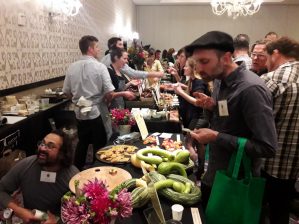 One of my favourite trips of the past couple years has been my venture down to Portland to the Culinary Breeding Network’s Variety Showcase. Last week (sometimes it takes a while to get to these blog posts) I made it down for my second visit to the event and had another great time.

The Variety Showcase is hosted by the Culinary Breeding Network, which is best described using its own words…

The Culinary Breeding Network consists of plant breeders, seed growers, farmers, chefs, produce buyers and others in the food community engaged in developing and identifying varieties and traits of culinary excellence for vegetables and grains.

Its mission is to break down the wall between breeders and eaters to improve agricultural and culinary quality in vegetables and grains. The goals are to:

The Variety Showcase is the CBN’s premier annual event which bring together chefs and plant breeders to draw attention to the important work being done in organic plant breeding. From the CBN Facebook page,

The Variety Showcase is an opportunity to meet plant breeders that do this important work. On October 2, more than 30 breeders and seed growers will fill a ballroom at The Nines hotel. Each of these individuals has a unique story of why they are doing this work.
The Variety Showcase strives to go beyond a typical “foodie” event. The hope is it will be an interactive, engaging (and tasty) learning experience that will leave every attendee with a greater understanding of why organic breeding is crucial for the future.

One of the reasons I am drawn to the CBN is that its values align well with the work we are doing here in BC – and in particular, our work with the BC Seed Trials which engages researchers, farmers, and seed growers to identify crop varieties that perform best in regions throughout BC. But one of the gaps in our engagement was with the general public and one of the gaps in our research was around taste.

After first learning about the Variety Showcase it became instantly obvious to use that we must not neglect the culinary aspects of the crops we are working with. It really doesn’t matter how well a crop performs in the field if no one wants to eat it. And while we can do all the tasting assessments we want, we saw the opportunity to engage the public in this culinary exploration as well as allowing us the bring our research out of the field and more into the public realm.

Interestingly, before I even made it out to my first Variety Showcase in 2016 it was an image of a beet display from the previous year’s event (taken by the talented Shawn Linehan) that got the ball rolling for us. As we were working with golden beets that year, we saw a great opportunity to host a visual and culinary tasting event to engage the public and highlight our research. 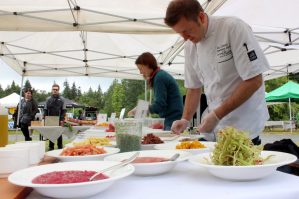 Our first tasting event, held at UBC Farm in 2016, was a great success, despite a not-so-great-weather day. We had over 150 participants come through, taste the beets, and fill out evaluation forms – rating the beets, both raw and cooked for texture, flavour, and appearance. While participants were engaged in the tasting we were able to talk about the different varieties of beets we were growing, while local Chef Rob Cleland talked about the many characteristics of beets one needs to consider when working with this crop. At the end of their tasting excursion, participants were treated to a “beet taco” dish made entirely of beet and beet extracted ingredients. Many minds were changed about beets on this day! 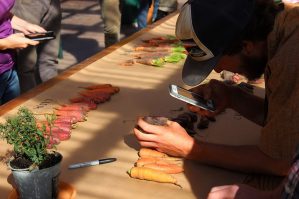 Later in 2016 we were lucky to attend another tasting event hosted by the Organic Seed Alliance in Washington State which gave us even more ideas on effective ways to engage the public as well as gather feedback on the culinary aspect of the crops were were working with. Our favourite technique was using a kraft paper table cloth on which participants could write their comments about each variety. We used this method for a kale tasting later that year and continued with this method in 2017.

We followed up with our second beet tasting event at UBC Farm in 2017 and with a bit more promotion and much sunnier weather, we had over 300 participants complete 225 evaluations. For the 2017 tasting we received UBC ethics board approval to collect and use the data for our academic research purposes. Building on the influence of the Variety Showcase, we connected with Solveig Hansen, a graduate student at University of Wisconsin – Madison, who was also hosting tasting events around her research with beets. Solveig really helped us refine our data collection methods to make the event that much more engaging! This tasting showed we could continue to engage the public while collecting valuable academic data at the same time.

Throughout 2017 we have continued to use the culinary aspects of the crops we are working with as a means of engaging the public in our research. We have done carrot tasting at 4 different events this year and still have more to come! We have also added tastings as part of our evaluation field days of BC Seed Trials crops

As part of FarmFolk CityFolk’s work in participatory research with farmers and post secondary institutions, such as University of British Columbia, University of the Fraser Valley, and Kwantlen Polytechnic University, these tasting and culinary events have really enhanced the quality of our programming and our ability to engage academic, farming, and public audiences. While our events are quickly taking on a character of their own we are grateful to have precedents such as the Variety Showcase to draw upon. While we have started many of our research and outreach programs from scratch, having a such a great example to draw from made setting up our own events much easier.

My travels this year took me to numerous tasting events and resulted in many conversations about the culinary aspects of crops – it seems funny in retrospect how little we do seem to talk about the culinary aspects of crops we are breeding for food. To paraphrase myself from earlier in this blog – how can we not think about the culinary aspects of food crops we are breeding? If the crop doesn’t taste great then what good is it?! (actually it’s much more complicated than that but I needed a dramatic statement there! While a crop may not appear to have good culinary qualities, it may have other qualities such as cold tolerance that make it valuable breeding material in to which flavour can be bred by crossing it with that particularly tasty variety that dies off after the first frost).

With the continuing re-emergence around the appreciation of the value of food beyond its caloric value happening in communities across North America I expect we will see more and more public engagement in culinary expos such as the Variety Showcase – this will certainly be the case here in BC. These events will play an important role in the continued growth of our local food economies which, despite the continuing consolidation of agri-food businesses across the globe, are reconnecting citizens and communities to food and building a new food culture that puts the needs of people first.