Posted on Thursday, 26 October 2017 under BC Seeds

The leeks were seeded way back in March and will continue to grow into November for their first harvest and then into January for their second harvest. One of the reasons we are holding them in the field so long is to see how they hold up to rust pressure. In the picture below, to the right of the frog, you can see some orange rusty marks, which is indeed, the rust. There aren’t any effective reactive controls for rust (such as organic pesticides), so part of the preventative control we can take as researchers and farmers is to breed leeks that have a good degree of resistance to rust.

Rust is a fungal infection of the leaves, where the rust lives on nutrients provided by the leek leaves. While the rust infection won’t kill the leeks, it will reduce the functional capability of the leaves, over time this can stunt and damage the growth of the leeks. Some cultivated varieties of leeks will be more susceptible to rust than others, we want to know which ones! Even when a leek variety has been identified to be relatively rust resistant, the seed of that leek variety must be maintained for low rust susceptibility. Which means when growing leeks for seed, leeks that show susceptibility to rust infection must be removed from the population. Good seed is maintained; it is always an ongoing process.

At the end of August, whilst evaluating the level of rust damage per leek variety, it was observed visually and audibly that there were many frogs present in the field. This is a good sign of agro-ecosystem health because; in general frogs are sensitive to pollutants and chemicals. So it’s good they feel happy in our fields. 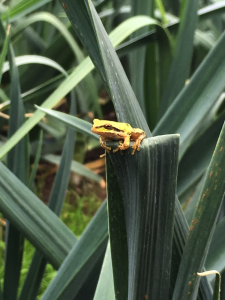