Last week we got our isolation tent setup and our carrot stecklings planted at UBC Farm. This is a multi-step process which we documented much of. This is the first year doing the carrot seed project at UBC Farm.

The carrot stecklings we are planting are Nash’s Nantes – bred by Nash Huber in Washington State. They were grown for us by Elaine Spearing in Enderby, BC. These stecklings were stored in a cooler over the winter. Despite long-term storage guidelines, we simply keep them in the bags they were packed in after cleaning and harvest. They spent close to four months in storage and we had no losses. However, we may still find that some do not grow as well as others. 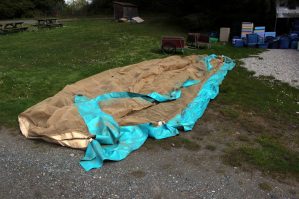 We started the process by cleaning the tent. It was used at another farm last year so we wanted to reduce the risk of transferring any disease. We cleaned both the tent itself as well as the posts and anchors.

Once the tent was cleaned we moved out to the field to set it up. The tent is a simple structure and goes up easily. The 10′ x 20′ structure has 6 posts which are placed into anchors for support. We start by hammering in the anchors; then we add the vertical posts, the post fittings, then the horizontal posts. Once the frame is done we dig a trench around the perimeter into which we can bury the bottom flaps of the tent to create a good seal against insect entry and to weigh the tent down. After the frame and trench are ready we pull the tent over top. Here it is in time lapse:

Once the tent is up we can start working inside the tent. First we make two raised beds with a path in the middle of the structure. The we will set up posts and twine on the outside of the beds for support as the carrots get taller. Because of the tent, the carrots do not develop as strong of a stem as they do when exposed to the wind and are more susceptible to lodging. Getting the twine up early makes things easier later in the season! Here is that process: 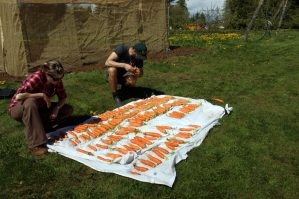 The structure is now ready for planting. We do have our stecklings but we want to do some selection to ensure we plant the best ones. We had about 140 to choose from. We selected stecklings that had a good nantes shape (blunt tips and crowns; minimal taper; no rat tails) as well as rogued out those that showed signs of disease; were misshapen; had cracks; or generally just didn’t look great. As we had a limited number of stecklings we had to include some roots that were not ideal which really speaks to the importance of having a large population size.

Having a large population allows you to do heavy selection and still have a good population left to maintain genetic integrity. After this selection process I could suggest using at least 5 times as many stecklings as you plant to grow – especially if you do not know much about the variety and any previous selection that was done. We didn’t get to do the selection in the field for these stecklings which was unfortunate as we could have done an initial selection in the field with the rogued carrots going to the bulk carrot market.

The stecklings we rogued out of the tent will be used in our control plot just outside the tent. We won’t be able to keep this seed as it will cross with the abundance of Queen Anne;s lace in the area. But we can compare differences between the two crops to see how growing in the tent affects crop growth.

Now we are finally ready for planting. It is not an easy endeavour to plant carrot stecklings into a rocky soil! We had to navigate rocks both large and small to get these guys into the ground! Here is that process:

We plant the stecklings so the crown is just sticking up out of the ground. We will top the beds with compost and add drip lines and a timer for irrigation in the coming weeks. Our planting time was great because it was followed by a few days of rain to wet the soil and help the stecklings settle.

Next week I will get the irrigation set up and if it is a sunny day will do a first trial of the fly capture system. I still also need to set up the stakes and twine on the inside of the beds to support the stecklings they grow larger.