Well, it has taken a while to get this post up, but here it is!

We have posted many stories of the golden beet seed crop at Local Harvest – from selection and planting; to growing and observing; to harvesting and drying; and then comes the time for processing – the step that gets the seed ready for planting and sale. 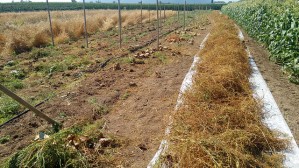 After harvesting the crop and allowing it to dry in windrows in the field, Dan brought the crop inside to protect it from the weather. As the growing season was still in full swing at this time, it was hard to prioritize processing the beet seed. But once the seed is inside and protected from the weather there is less worry about seed damage and the processing can be done at a later time. One of the perks of processing seed is it can easily be put off to a later date!

To remove the seed from the stalk, a thresher is often used. There are many types of threshers suitable for small to mid-scale use: 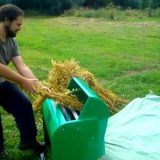 A foot pedal drives rotating drum which is covered with protruding spikes or tips which catch the seed and rip it from the stalk. There are various models available which are specialized for different crops. Motorized versions make things even easier, though the foot-driven model is very efficient and great for off grid growers. 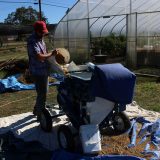 The belt thresher consists of two belts which run close and parallel to one another, but at different speeds. As the stalks pass through the two belts the seed is torn from the stalk and a fan at the end of the process keeps the two streams separate. This does not get the seed completely cleaned, but does separate the seed from the stalk quite well. 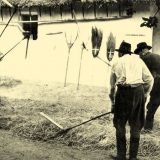 Although a bit “old-fashioned” hand flailing is an effective low-tech threshing method that is still used today. Traditionally used with grains, it is effective with beans and other crops as well. What is fun about this method is the technique and art involved in perfecting it in order to be efficient! 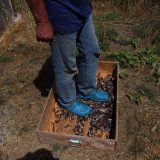 This is one of the simplest methods of threshing, demonstrated here by Dan Jason with a bean seed crop. Not only can you get a good work out with this method, but you can also work on your dance moves. A similar method to this, growers will wrap up seed-laden stalks in a tarp and drive over them with a car or tractor.

We ended up using a variation of the box thresher and hand flailing for our needs. Instead of using a box, we used a large fruit/produce bin. These fruit transport bins worked very well for our purposes for many reasons:

We did a combination of stomping on the stalks and, in true Canadian fashion, using hockey sticks – much like a hand flail, to break up the stalks and mix the seed – helping it to fall through holes in the bottom of the bin. This left us with a good pile of seed with only small amounts of stem mixed in. As an initial processing step this turned out to be very efficient for a low-tech threshing method. 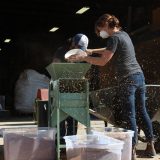 The winnowing was fairly effective in removing most of the chaff and dust but still left many small stems in the mix. The stems, being about the same weight as many of the seed, were thus blown into the seed chutes instead of being blown out with the chaff…

This left us with fairly clean seed, but not yet suitable for seeding with a seeder. Another round of the winnower and a few screens should allow us to get the seed ready for seeding and sale!