Posted on Saturday, 29 October 2016 under BC Seeds

As we near the end of the growing season we approach the beginning of the seed cleaning season!

This week we were cleaning carrot seed at the Sharing Farm. Kristjan and his crew harvested the carrot umbels about a month ago and left them to dry in their barn. It is important to harvest the carrot seed when it is ready so as to lower the risk of damage to the seed by fall rains. Once harvested and secure inside they can be left until time frees up in the fall to process.

And that day was this Thursday! Myself and Shauna MacKinnon headed out to the Sharing Farm to join Kristjan and a crew of volunteers to begin processing the carrot seed into its finished form (ready to plant!). 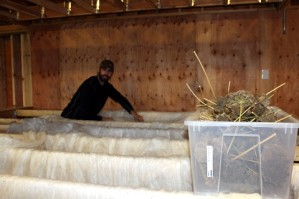 We started the day by gathering all the umbels from their drying spot.

The carrot umbels (seed heads) were drying on a remay canopy Kristjan made which helped them dry and kept them out of the way. Loose seeds stuck a little bit to the remay but we easily got most of them removed.

The carrots were grown in a 10 x 20 foot space. So one of the goals of the project is to determine potential yield when grown in an enclosure. Although these enclosures are relatively small, they could potentially produce a respectable amount of seed. They also give us a sense of what could be produced on a larger scale. 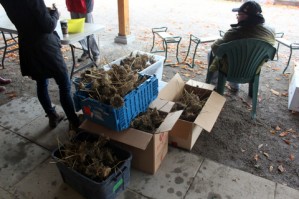 Here are the umbels ready to be stripped of their seed!

When we had all the umbels gathered it amounted to 7 totes of seed heads! Considering we have no specialized equipment for processing carrot seed, it was a bit of intimidating, but with a good crew of volunteers we were confident we could get through it all.

The cleaning process starts with removing the seeds from the umbels. We are doing this part of the process by hand. It can be done in a more mechanized way, but with a group of ten volunteers we thought we’d do it by hand! Also, by carefully removing the seed by hand we keep most of the stems separate which makes the seed easier to clean at a later stage of the process. 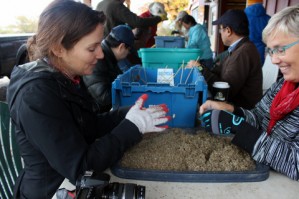 Shauna MacKinnon works with volunteers to remove the seeds from the umbels in the first step of the cleaning process.

The seeds are fairly easily removed from the umbels by rubbing them between your hands or simply pulling them off in clumps. Wearing gloves help protect your hands and gives you a bit more friction, making the process easier and quicker. It took a group of 12 of us about an hour to clean all the seed from the umbels reducing the seven bins of seed down to one.

The process went fairly smoothly, but may have been accelerated if the umbels had been a little drier. Even though they had been drying for over a month, the moisture in the air kept them a little bit damp. Ideally they would have spent a few days in a warm, dry room to get them really dry. This would have allowed the seed to separate much easier from the umbel.

But removing the seeds from the umbels is just the first step in the process. This is not yet their finished state. Although the seeds are now separated from the seed head, they need to be further processed. 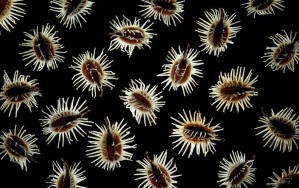 These images from the World Carrot Museum (who knew?!) show carrot seed under the microscope where their “beards” are obvious.

Carrot seeds have a hairy covering, or beard, that also needs to be removed. This brings the seed into its familiar form and makes it suitable for the seeders that farmers use to plant their crops. The beard is much more difficult to remove from the seed than the seed is to remove from the umbel!

We removed the beards in two steps. First we screened the tote of seeds through bigger screens to further break up clump of seeds and remove bits of chaff that still remained. We then proceeded to start on the more detail-oriented process of removing the beards themselves. 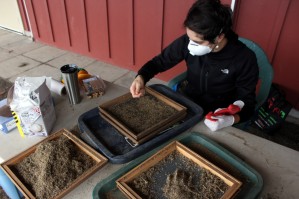 The Sharing Farm’s Jenn Cline has a go at removing some beards! 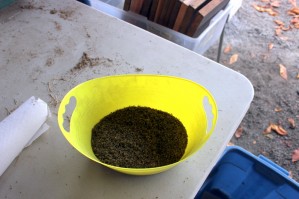 This is a very tedious process, but as you rub the seed you can see their final form starting to take shape.

In the end we were not able to get the seed fully processed but we got a small sample completed, giving us a good sense of how much seed we will get in the end. Before doing another processing session the seed will now be set inside a warm area to further dry down and make the final step easier.

This was a great experience in getting to better know carrot seed. Already we are seeing the potential seed production from our isolation tents! Both of the other growers in the project have also started processing their seed so we will soon have results from all three sites.